Sometime in 2012, I found out there were guinea pigs at the animal shelter near my parent's house. I bought the materials for and built a 2x4 grid C&C cage (click here for info on making your own) for my new pets. When I went to the shelter on April 24th, only one of the two pigs I had seen online was still there. We stared at each other as she sat in her green plastic igloo and ate newspaper. Ten dollars later, I had a guinea pig. 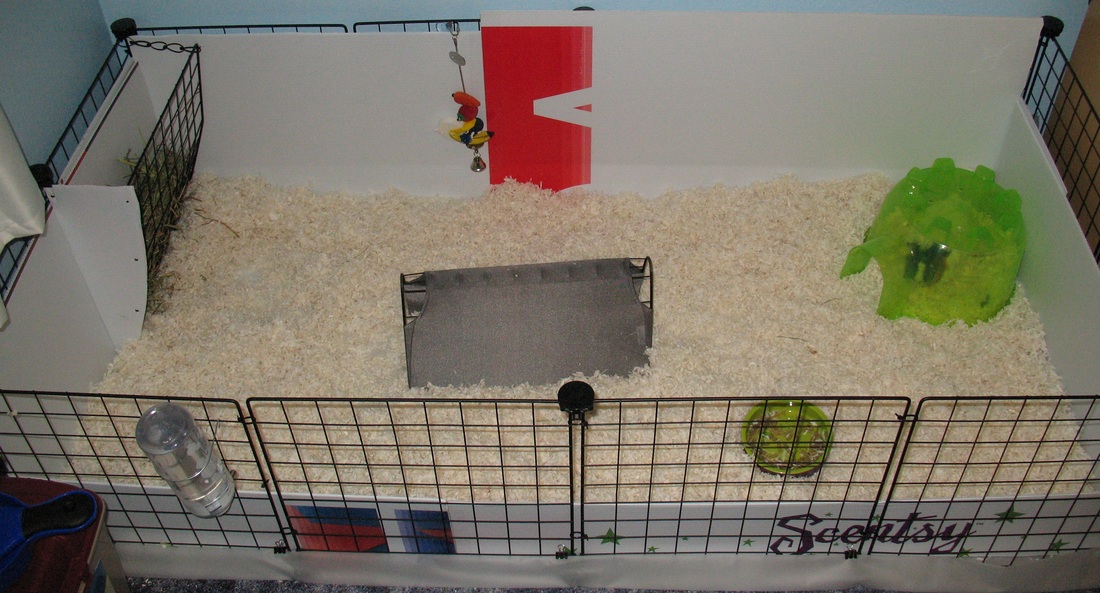 Overview of the cage, about a month after bringing my pig home.
After a while I noticed my guinea pig, who I named Zelda, was getting fat. Really fat. At first I thought maybe she was just eating too much, but soon there was no question about it: the shelter was wrong when they thought they had two females together. On June 21st, three little piggies were born. 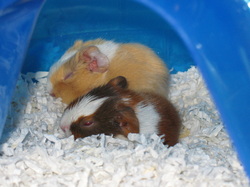 Babies Peach and Elli.
The third baby passed away the day it was born, but Peach and Elli became permanent residents of my room. At first the pigs were the sweetest little family ever, but over time they became territorial over their favorite hideout spots and didn't cuddle up anymore. But, they still eat together and don't fight unless they are in an enclosed space (like a pet carrier) so I think they're OK living together. They seem to prefer each other's company over being alone, anyway.

It makes me smile every morning when I get up and the girls remind me to bring them some breakfast. Even though they aren't the cuddliest of critters, I appreciate when they don't fight being pet or picked up or having their nails trimmed. Even when they kick and squeal, I love 'em and enjoy the time we spend together. 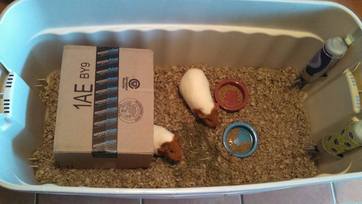 Lilly and Rose in their temporary cage on their first day home.
In March 2015 I saw a video on Facebook of two year old sister guinea pigs at the local animal shelter. After thinking about them all day at work on Monday I decided to get them the next day, March 17th. Their shelter names were Lilly and Ellie, but since I already had an Elli I decided the littler pig needed a new name. My mom suggested Daisy, which was pretty funny since my original Elli was also almost named Daisy, but the name just didn't work for me. Eventually I decided on Rose, after thinking about Super Mario's Rosalina. The new additions prompted me to build new stacked C&C cages for my pigs. Now each family has its own 2X5. These sisters are just as different from each other as Peach and Elli. Lilly is skittish but loud (a bit like Elli) while Rose is sweet and cuddly (even more than Peach or Zelda).
Powered by