How I got into animation 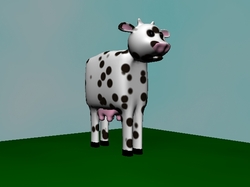 When I was a little kid I went to a movie theater with my family and saw Toy Story. I fell in love with the idea of computer animation and becoming an animator. It combined art, math, storytelling, logic, and so many other things I enjoyed in school. There was a pretty big obstacle in my way, though: computers. My parents didn't have one, and at school we were only allowed to use them for programs that taught typing and, if we were lucky, educational games. Did I mention no Internet access? So, for years the dream of becoming an animator was buried in the "never gonna happen" files of my brain.
I thought about many different careers while I was a kid in school. Painter, farmer, stay-at-home-mom, veterinarian, photographer, author, nurse, librarian. In middle school I found I actually liked working with computers better than working with other kids. I still couldn't type without looking at the keys (sometimes I still can't), but if an assignment required a Powerpoint presentation or an Excel spreadsheet, I was going to make an "A" on it.
In high school I took a class called Multimedia, the description of which included the words "art" and "computers," two of my big interests at the time. We used many different programs, most notably Photoshop and a 3D modeling program I can't remember the name of. The modeling program had a lot of cool tools and options but because each student had a limited amount of storage space my work often wouldn't save properly. We didn't do any animation, but having my hands on a program like that, even for just a few weeks, revived the animator dream.
My senior year I signed up for a computer animation class. The class was held at a community college and lasted two class periods every day. If I could have spent all day there, I would have. The software most of the class used was called Lightwave 9. Some of the students also used Modo, but I wasn't one of them. My teacher thought my projects all turned out really well and he all but demanded I enter every animation competition he could find. I placed first in most of the district meets (very little competition) and even placed in one competition at the state level. It was a ton of fun getting out of class to go on trips with the other students in the class to present our work, and for once I didn't feel like a dork for being good at something at school.
However, something still held me back. I didn't think I could make it as an animator at a professional level. I wasn't a dork but I wasn't a master, either. So instead of pursuing animation as a career I went after a degree in Computer Science, which sounded much more important and useful. I did well enough, graduating in the top ten percent of my class, but I didn't really feel like I fit in to the computer scientist box I had put myself in. After spending nine months at a job many of my peers would have loved to have, I quit.
Luckily that job, although I couldn't deal with it, paid well enough that I decided I could treat myself to a new computer and a copy of the software I loved in high school. I haven't done as much with it as I would have liked, but I'm enjoying it and hope to have more to show for it soon.
Powered by